The Geography of Murder: Comparing Homicides in Sister Cities Across the United States and Mexican Border

Across the border of the United States and Mexico vast difference of homicide rates occur.  This research depicts the statistics of homicides over several years in the sister cities of San Diego, CA and Tijuana, Baja California; El Paso, TX and Ciudad Juarez, Chihuahua; Nogales, AZ and Nogales, Sonora; and Laredo, TX and Nuevo Laredo, Tamaulipas. 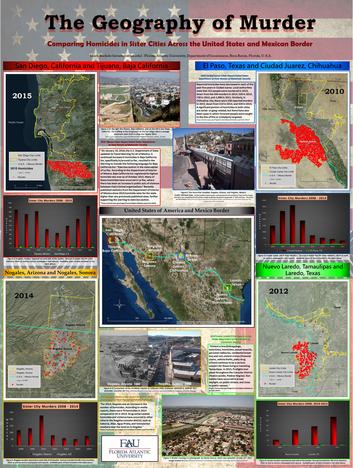 Since the creation of the Landsat program in 1972, urban growth and change can be monitored from space.  With a 30 meter resolution large Metropolitan Statistical Areas (MSA) are ideal case studies for such a spatial assessment.  The population of the Miami - Fort Lauderdale - West Palm Beach MSA has continuously expanded, growing exponentially in the years past WWII (and with wide spread air conditioning).  This project compares the dramatic increase in population with the outward spread using imagery and animations. 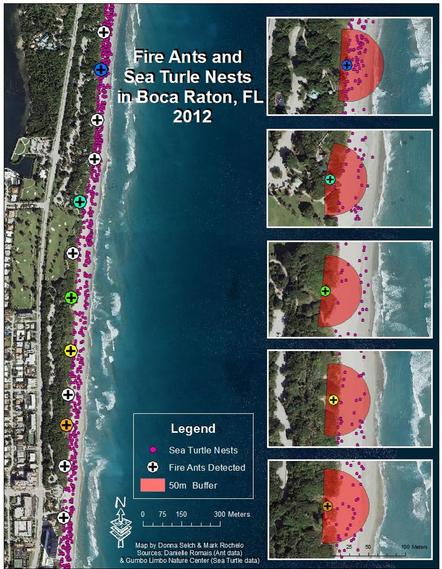 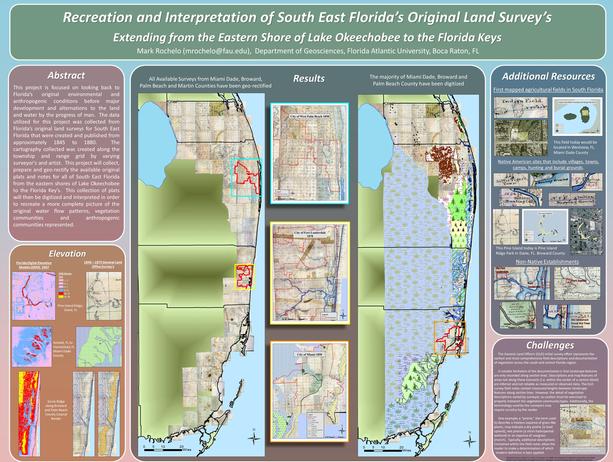 In Boca Raton, FL, fire ants are an exotic invasive species that can attack and devour the hatchlings and eggs of sea turtles who nest on the beaches.  This study aimed to identify sea turtle nests possibly affected by fire ants within a 50 m radius (average range for fire ants).

Classification of urban land cover is important in many areas of science including green space analysis, mapping urban growth, city planning and economic development.  While aerial photography is typically used for such analysis due to its high spatial resolution, it provides clues to the land use / land cover with respect only to visual clues.  LiDAR data contains elevation data that is useful in differentiating spectrally similar vegetation and impervious features which have distinctly different elevations.  However, LiDAR contains no scene information. Therefore the fusion of LiDAR data with aerial photography is beneficial providing more accurate classification analysis.  By combining the two types of remotely sensed imagery most of the disadvantages associated with either data is atoned.  This study revealed that overall accuracy from urban land cover classification improved using fused imagery over using aerial photographs alone showing how LiDAR data can improve classification analysis.

Geographic distribution and grain size of sand samples.  Grain size may determine the amount of light scattered and absorbed by a grain.  According to Beers Law, a larger grain has a greater internal path for photons to be absorbed; smaller grains have more surface reflections (Clark, 1999).  In the visible and NIR, as particle size decreases, the albedo increases in weakly absorbing minerals (such as silicates); the albedo of strongly absorbing minerals decreases with decreasing particle size (Cooper and Mustard, 1999). 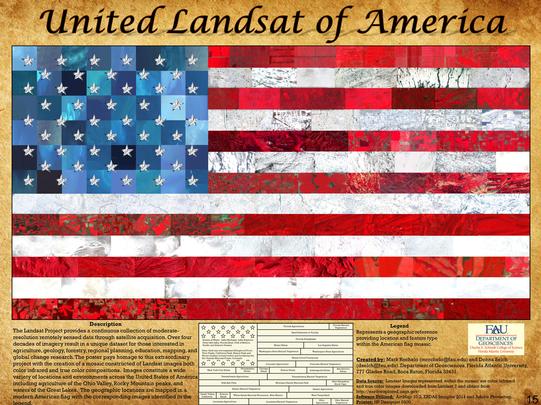 The Landsat Project provides a continuous collection of moderate-resolution remotely sensed data through satellite acquisition. Over four decades of imagery result in a unique dataset for those interested in agriculture, geology, forestry, regional planning, education, mapping, and global change research. The poster pays homage to this extraordinary project with the creation of a mosaic constructed of Landsat images both color infrared and true color compositions.  Images constitute a wide variety of locations and environments across the United States of America including agriculture of the Ohio Valley, Rocky Mountain peaks, and waters of the Great Lakes.  The geographic locations are mapped in a modern American flag with the corresponding images identified in the legend. 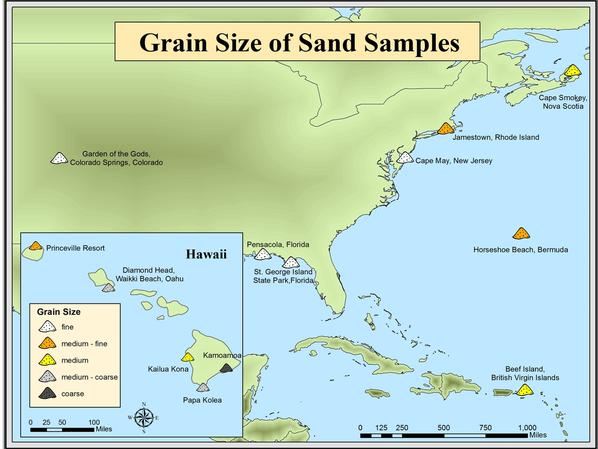 This project is focused on looking back to Florida’s original environmental and anthropogenic conditions before major development and alternations to the land and water by the progress of man.  The data utilized for this project was collected from Florida’s original land surveys for South East Florida that were created and published from approximately 1845 to 1880.  The cartography collected was created along the township and range grid by varying surveyor's and artist.  This project will collect, prepare and geo-rectify the available original plats and notes for all of South East Florida from the eastern shores of Lake Okeechobee to the Florida Key’s.  This collection of plats will then be digitized and interpreted in order to recreate a more complete picture of the original water flow patterns, vegetation communities and anthropogenic communities represented. 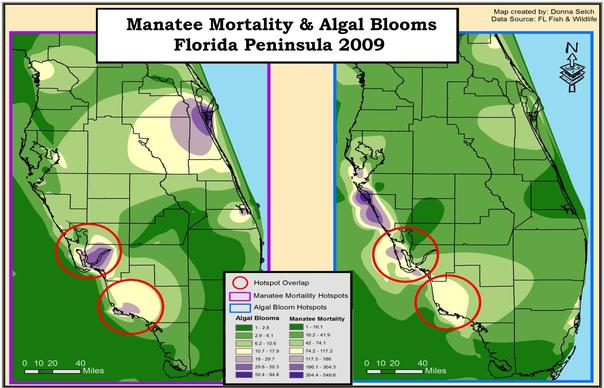